Can your mind influence your genes? 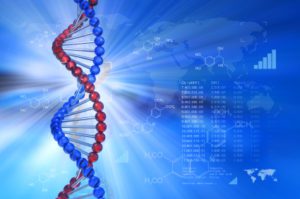 It’s doing it 24 hours a day, 365 days a year. It’s impossible, actually, to disentangle your mind from your genes.

When you learn something new, or think the same thing over and over again, the brain lays down neural pathways. But they don’t just spring out of thin air. They are the consequence of a series of events that result in the activation and deactivation of hundreds of genes. But here’s the thing – these events are set in motion by something you’re thinking about!

Setting aside the details for a moment, what we’re left with is that thinking leads to the activation and deactivation of genes. This is what I call the mind-gene interface.

We see the same thing with meditation. Consistent meditation has been shown to bring about structural changes in the brain. With meditation it is mental focus on something – an idea, perhaps, or breathing – that brings about theses effects. An 8-week meditation study at Harvard even showed that meditation impacted 1,561 genes in novice meditators and 2,219 genes in experienced meditators. In the novices, 874 genes were switched on and 687 were switched off.

Some people might wonder why this is important to know.

It’s important because we grow up believing that the mind is impotent, something that we only use to think with and to analyse life events. But this is disempowering. It leads us to think that we can’t do anything to help ourselves or to change anything.

A good friend of mine spent some weeks in hospital over the past year. Being a proactive person with a determination to do what he could to facilitate his own recovery, when he asked what he could do to help himself, he was told, ‘nothing’.

But this response is only a habit of thinking that’s based on the notion that the mind is impotent, and I’d probably have given the same response myself if I was wedded to that notion. Actually, the mind can be thought of as a force, in that the mind’s focus can bring about biological and physiological effects in the brain and body. Knowing this, there is never nothing that a person can do. We have to think, so how about we learn what to think about?

On a totally obvious level, for instance, if a person is sick, thinking about stressful things is not going to help. Chemicals of stress can be produced and circulate around the body. So thinking about calming things can help. Similarly, thinking affectionately is good for the heart. Thinking hostile and aggressive thoughts isn’t.

We’re all chemists in a way. The chemistry of the brain and body responds to what we focus on and how we feel. If we learn what to focus on we can, to an extent, switch on and off different chemistry. We then take our chemistry skills onto a new level. I see this as the next great development in mind-body medicine.

The reason I explain the science of mind-body medicine is to give people faith in themselves. I believe that this faith can make a real difference.

Believing in a medicine or in a doctor leads to better outcomes than not believing, so clearly belief has effects. So how about we learn to believe in ourselves? Not at the expense of medical advice, of course, but in addition to it.

Your mind is more powerful than you think. And you are the one who directs it.

It’s a start. And at the very least we’re doing something positive with our minds.

Some good books on the mind-body connection are:

I also have some mp3 audios: How Your Mind Can Heal Your Body (live lecture) and ‘6 Principles of Mind-Body Medicine‘