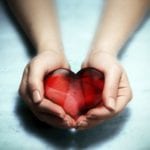 The term ‘Helper’s High’ was first coined by Allan Luks, in his book, ‘The Healing Power of Doing Good’. You’re probably familiar with the high. It’s that good feeling we get when we do something kind for someone or an animal.

There are loads of ways we can help each other. Giving time to someone face-to-face brings on Helper’s High. A recent study commissioned by the charity ‘Guide Dogs’ found that when we give our time in helping someone the improved feeling can last up to 24 days. It’s even more pronounced in the 18-24 age group, where effects were reported to last 34 days.

Donating money also makes us feel good. The study found that donating money can make us feel positive for round about a week.

The good feelings come because we’re wired to feel good when we’re kind, which I’ll explain below. That’s why Helper’s High is pretty universal. The Guide Dogs study was of over 2,000 people and found that 95% of those who gave their time to a good cause felt happier. This is what Allan Luks’ study found too. Questioning over 3,000 people on their charitable ways, he also found that 95% reported feeling good when they help others.

I personally think it’s important that kids and teens realise the importance of kindness and how it makes a difference. They’re the future.

In a powerful but mostly forgotten study back in the early 1970s, rather than be punished, teenagers with behavioural difficulties were asked to tutor younger children instead. The results were later published in the American Journal of Psychiatry. By helping younger kids, the ‘teen tutors’ made significant improvements themselves in maths, reading, and sentence completion tasks. Most of them also showed positive changes in their attitude towards themselves, others, education and the future. Quite a result, I’d say.

There are hundreds of studies that show how kindness makes us happier and is healthier for our hearts and immune systems. I don’t intend to list them all here. That would make this a veerrryyyy long blog. If you do want to access them, I collated a large number of them in my book ‘Why Kindness is Good for You’ and reference over 250.

I would also say that deep in the human psyche, and this is a spiritual thing for many, is the sense that helping each other is basically the right thing to do. We have an intuitive sense of the rightness of helping.

What I really want to get across in this blog is that helping each other is a mark of who we are. It’s in our nature. It doesn’t mean that you have to spend every waking moment helping, else you feel guilty, nor that you respond to every call for help. We have lives to lead, families to support, jobs to do. But if we can just be a little alert to the needs of those around us, that’s a good thing.

I’d also like to address an issue some have with kindness, that it’s really selfish to be kind because we benefit from it. My view is that we help because it’s our nature to be kind. We don’t help to make ourselves feel good. Evolution has simply built a little emotional reward into our biology.

I’m saying this because I’ve read endless debates on whether there is really such a thing as altruism, given that we gain from an act of kindness. It’s the question I’m most often asked when I give a media interview on the science of kindness. My answer is always the same. “I prefer to leave the arguments to academia. In meantime I’m going to be kind.”

And in case you wondered, helping animals produces the same positive effects as does helping humans. Around a month after our dog, Oscar, passed away last year, we went to a rescue center and took some dogs for a walk. In these places dogs don’t always get the exercise they need and the staff are always looking for volunteers to help out. I remember feeling really good that we were able to provide some happiness for the dogs we walked.

And to come back to the selfish issue, we walked the dogs because we loved Oscar and we knew how much he loved to walk. We took the dogs out because we knew it would bring them some pleasure. It just so happens it gave us a sense of inner warmth as well.

I love that there’s such a thing as Helper’s High, that kindness benefits our health (mental and emotional health, heart, immune system, nervous system). It’s like a little reward we get. We don’t help for the reward, but it’s kind of nice when it comes anyway.

So I’ll leave you with my guiding principle in life, which you might be familiar with from some of my other blogs: Whatever you do, do it with kindness.

Just finished a fantastic insta live chat with @DrDRHamilton on working through anxiety. He provides really simple practical tips all backed up with science. He is a breath of fresh air. Click the link, save it for when you have time and/or need it

Volunteering is a win win, you help your community and turn your mental health is positively impacted.
Kindness is infectious!

Based on the intriguing work of @DrDRHamilton we have formed a kindness committee at Lynburn. We aim to promote kindness and self-care. Kindness boosts mental health, is cardioprotective, supports a healthy immune system, reduces inflammation and it's contagious! #BeKind

Kris and I had a great chat about anxiety and some science-based strategies for working through anxiety. See video link below.