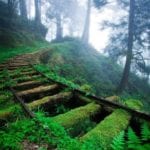 Go for a stroll along a path in the park and it will guide you around the landscape – around water, trees, and flower gardens. Your route is set by the outline the path takes as it meanders through the park.

We walk along invisible paths too; we just don’t know they’re there. Instead of our eyes following the outline of a path in the park, these invisible paths are connected to our minds and they gently (and sometimes forcefully) guide us to the left, to the right, to stop, to go backwards, and even to go round in a circle at times.

They are paths along a landscape of consciousness.

Looking inside the cells of our bodies reveals proteins, enzymes, hormones, DNA, and small organelles. Looking inside, say, a piece of DNA reveals atoms, which are approximately 0.00000001cm wide. But inside atoms, it’s a very different reality. Most people know of protons, neutrons and electrons and we get the idea that they are jammed together into a little ball. Actually, if a proton was the size of a tennis ball, an electron would be the size of a particle of dust and it would be approximately 1 kilometer away.

No one knows for sure what’s actually there, but my instinct is that the fabric is consciousness itself. I’m led to that conclusion in two ways. The first is purely intuitively. That might not stand up to scientific reasoning, but then again, if you are trying to measure consciousness, then like it or not, your best tool is your own intuition.

The other way is more rational as it’s my interpretation of the general outcome of hundreds of experiments that demonstrate the correlations between the minds and brains of people separated by distances.

Take, for instance, the experiments where one member of a couple is placed inside an MRI scanner or connected to an EEG device. The other person is in another room and then, after a short time, the scientists startle him, perhaps by shining a light in his eyes. At that moment, the MRI or EEG detects a flash in the other partner’s brain.

If we remain wedded to the idea that consciousness is inside the head, a side-effect of brain chemistry, then we have to dismiss research like this as somehow flawed. There is a lot of it around so that would be a lot of quality scientists that we would have to cast aside as inferior or misguided researchers, which I’m not sure we can do.

What if, instead, we assumed the research is correct? We’re then led to the conclusion that consciousness is not inside the head after all, and can entertain the possibility that the brain is more like a sophisticated aerial that receives and processes consciousness. Damage to the aerial would affect a person’s mind, which is what we do in fact see in medical science.

So if it’s not inside the head, where is consciousness? I’d say it’s everywhere. The brain (aerial) gives us a way to focus it in our individual ways – me as David Hamilton, you as, well, you. Consciousness is a field that permeates all space, just as radio waves and your favorite TV programs are actually buzzing everywhere around you but are channeled through your radio, TV or computer. In effect, consciousness is smeared throughout the universe and emanates from the fabric of reality, where it is in its purest state.

Now we’re getting close to understanding the invisible paths in our lives. Just as we walk through physical landscapes, so there are landscapes of consciousness that we walk through as well. We just can’t see them. But they guide our journey through life – like intuitive whispers.

They take us to people who come into our lives for a ‘reason, a season, or a lifetime’. They also guide us to particular events that may or may not make sense to us at the time.

So maybe life isn’t so much the blank canvas (or landscape) that many of us assume. Perhaps there are deeper forces  – invisible paths of consciousness – at bay that govern the direction of our lives.

I have always believed in the idea of soul mates, that there are people who are important to us, who are meant to be in our lives. I am more convinced now than ever.

I was, myself, led to the idea of landscapes of consciousness while I was writing my book, ‘Is Your Life Mapped Out?: Unraveling the Mystery of Destiny vs Free Will’. I’m convinced, now, that I was guided along that particular path where I would receive those insights.

I often wonder if there is an ultimate path. I do believe that there is. It’s subtle, but its presence is seen everywhere. It is the path of love.

We are not forced to walk this path but, ohhhhh, it feels good when we do and so we walk it, then, out of choice.

Love is the path where destiny and free will meet. All of our choices are our own, but they are also inspired by the path.

You can get on the path at any moment. Just love those around you!

When receiving the Nobel Peace Prize, Mother Theresa was asked how we could best promote world peace.

She said, “Go home and love your family.”

For me, that about says it all.

You can read more of this idea and other aspects of destiny and free will in my book, ‘Is Your Life Mapped Out? Unraveling the mystery of destiny vs free will’ (UK paperback) (US paperback) (UK Kindle) (US Kindle)

8 thoughts on “The Invisible Landscape”