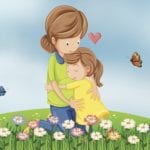 I’ve written about hugs in some past blogs and books, in particular about how they produce the hormone oxytocin, which is good for the heart. I coined the term, ‘A hug a day keeps the cardiologist away’. I love hugs so I couldn’t wait to share some exciting new research about how they can protect you from the common cold.

The research was led by Sheldon Cohen of Carnegie Mellon University. It was a simple study. His team asked 404 people how many hugs they received over a two-week period before exposing them to the virus that causes the common cold and monitoring them in quarantine.

It turned out that those who had the most hugs had lowest severity of cold symptoms.

There was a little more to the study. As well as hugs they monitored how much social support each person received. Those who felt most supported in their lives and relationships were most protected from the cold. Hugs accounted for a third of the overall effect.

It’s well known in science that when we’re involved in ongoing personal conflicts with people we’re less able to fight off colds and other infections. Have you noticed that? It’s presumed that the stress involved in the conflict can suppress the immune system. So the hug study was looking at the opposite effect – emotional, social support; i.e. support and closeness instead of conflict and distance. While conflicts suppress the immune system, the study implied that hugs boost it. Generally speaking, you can think of it as emotional support and closeness is good for us while consistent conflict and emotional distance isn’t so much.

I love this kind of research. It motivates me to keep spreading the word that we should be nice to one another, help each other, and of course hug each other. Hugs are easy to do. You just, well, give someone a hug. That’s it. Who would have imagined it can be so good for health.

I’ve previously written about the effects of hugs on the heart (in ‘The Five Side Effects of Kindness‘). Research has shown that hugs produce the hormone oxytocin, which is cardioprotective. That means it protects the heart. Oxytocin, and therefore hugs, reduces blood pressure and helps sweep arteries clear of free radicals and inflammation.

So this new research compliments the overall health-giving effect of hugs. Not only are they good for the heart, they are also good for the immune system.

So, I guess, we might as well make sure we give out a few hugs today, and of course welcome those offered to us too.

One thought on “A hug a day … boosts your immune system”