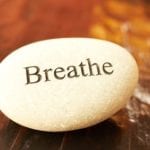 OK! Aside from the obvious – it keeps us alive – breathing actually has some hidden medical benefits that few people know about.

I spoke at an event at the weekend called Tapping Into the Source of Wellbeing, organised by my friend Gosia Gorna.

One of the speakers, Margaret Miller, is a Qigong master. She taught us all a few qigong exercises and I found the combination of conscious breathing and light movement to be really quite powerful. I felt fresh, vitalised, and alert. I’ve experienced the same sensations in the past with both yoga and Tai Chi, and with certain kinds of meditation. I personally love to breathe, which I suppose is kind of handy, given that you might have a hard time in life if you don’t. 🙂

There have been numerous scientific studies into these kinds of exercises in the past few years, with many showing enhanced immune function, reduced inflammation, reduced stress, and slower ageing.

I’m particularly interested in the effects on ageing. On a biochemical level, ageing is associated with an increase in what is known as baseline inflammation with a simultaneous reduction in resistance to infection.

Most people know what inflammation is. It is the redness and swelling that occurs at the site of an injury. It is a vital and necessary part of the immune response. But inflammation also occurs on the inside of the body. You just don’t see it. And, outside of the natural ageing process, much of it is believed to be a side-effect of lifestyle and stress.

There is a great deal of research currently going on in research labs all over the world into how to tackle inflammation as it plays not only a key role in ageing, but also has a hand in cardiovascular disease, diabetes II, rheumatoid arthritis, Alzheimer’s, and some cancers.

It turns out that the vagus nerve plays a major role in controlling inflammation. The vagus nerve sends signals to the heart, liver, spleen, and GI tract that actually turns down the levels of inflammation around the body, so there is much research looking into how to do this with drugs.

But what is so exciting is that we stimulate our vagus nerves when we practice breathing techniques. We can reduce inflammation just by breathing! Who would have thought that simple exercises that we can do any time can actually slow the ageing process, but that is what they do.

Numerous scientific studies have indeed now shown this powerful anti-ageing effect. Meditation, probably the easiest and best known of breathing practices, has specifically been shown to also increase levels of the anti-ageing hormone, DHEA, as well as growth hormone, which plays a role in growth and repair and thus slows down degeneration through ageing.

Most people don’t really breathe so well. When we have a lot on our minds, or when we are stressed, we tend to be fully exhaled and shallow breathe. From time to time we run out of air and take a large inhalation. It is much healthier to breathe regularly and comfortably, like children do.

So I thought it might be useful to write this short blog just to remind us how important breathing actually is.

One thought on “It’s Quite Useful to Breathe”

Is your school joining in? World Kindness Day will take place on Nov 13 and we have a range of activities on offer. Request your free World Kindness Day pack, filled with themed lessons, activities, and fundraising ideas. We’re also hosting LIVE workshops. https://schoolofkindness.org/world-kindness-day

1 lucky person can win a free (signed) copy of Carbon Choices - the common sense solutions to our climate and #nature crises (publish in Oct). All you need to do is like and retweet this by 21/9.
#greenbook #climatechange #carbonchoices
http://www.carbonchoices.uk

Overcome the fear that has been holding you back, allowing you to create the life you have always dreamed of - read #ThisGirlIsOnFire by @andrea_mclean. Find out more here: https://www.thisgirlisonfire.com/

Here’s a simple way to increase your energy. It uses the link between your brain and body. Eons of evolution has ensured that your feelings and their physical expression are in synch, so you can use your body to alter how you feel. https://youtu.be/_jXbxyUtAGk

I can honestly say that when I was at school, the