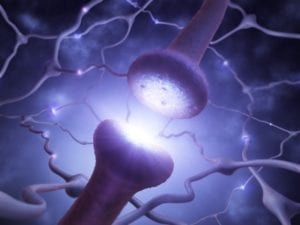 I’ve written a lot over the years on the subject of the mind-body connection. The origin of my interest actually goes back to when I was 11 years old and I was in the school library. A book fell of the shelf beside me. It was ‘The Magic Power of Your Mind’ by Walter Germaine.

At the time my mum was suffering from depression, which had begun a few years earlier as post natal (post partum) depression. I had an instinct that the book would help my mum so I took it home.

It really helped her. It didn’t cure her in a day or anything like that, but it taught her insights and strategies and gave her hope that she could chart a course through some of the difficult times. As a teenager, I often heard my mum say things like, “I can do it,” while pumping her fist, “It’s all in the mind,” “It’s mind over matter,” and “It’s the Thought that Counts,” which incidentally became the title of my first book. These were examples of my mum’s positive self-talk that she’d learned. Today we think of these as affirmations.

Growing up, a fascination with the subject and possibilities of mind over matter gradually developed in me. Later, after I completed my PhD in organic chemistry, I took a job in the pharmaceutical industry. It was there that my interest and understanding of the mind-body connection went up a notch. My job exposed me to the whole area of drug development where I learned a bit about the placebo effect. I quickly became more interested in the placebo effect and the whole mind-body connection than in developing drugs and often spent hours of my spare time pondering and reading up on the subject.

I left the industry after 4 years to write and speak full-time. Now, 8 books later, my interest hasn’t dropped a bit but in fact has grown considerably.

When I left the pharmaceutical industry in 1999, mind-body science was in its infancy, really. Now, there is a wealth of research showing beyond all doubt that your thoughts, beliefs and emotions cause physiological, biological, and even genetic changes all throughout your body. And when I say genetic changes, I’m not meaning that we change our genes or anything like that, but that our thinking changes the pattern of ‘on’ and ‘off’ of our genes. A gene might get switched on or off, for instance, as a consequence of what you’re focusing on.

Believing a drug will help you can cause it to work better. Believing it won’t help you often negates some (or all) of its potential effect. Paying more for a simple painkiller makes it work better than a cheaper version because of your belief that more expensive equates to better.

Imagining moving your arm convinces your brain that you’re actually moving it, an insight from neuroscience that has reaped benefits for thousands of stroke patients, and athletes.

A pilot can even fly a plane with his mind if the navigational controls are interfaced with a device that reads his brain activation.

There is no doubt whatsoever that your mind affects your body. The skill in making it work for you, really, is learning to control what you focus on.

And that really comes down to training, in much the same way that you learn any skill through training.

So I thought I’d give you a little insight into the mind-body connection today, enough perhaps to give you some faith in yourself, that you really do have the capacity to bring about positive changes in your health by adjusting your focus.