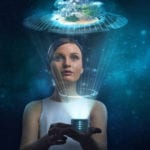 Look at grass. We say it is green. But it’s not inherently green. It’s green for us because we have 3 photoreceptors in our eyes that are sensitive to specific wavelengths of light. If we had different photoreceptors, grass would appear different. Grass is beige to a dog because a dog has 2 photoreceptors. Green doesn’t exist for a dog.

What about the solid world around you? If you look inside the atoms that compose everything, they are mostly empty space. So why don’t we fall through the ground we’re standing on?

Your weight presses against the floor and pushes the trillions of atoms in the floor against each other. The electrical forces in the atoms repel and push back. We feel the push as something solid but the push is electrical, not physical.

It’s the same for you as you stand on the floor. It pushes your atoms into each other, so they electrically push back. Energy on energy!

The perception of things being solid (including ourselves) is due to the interaction of energy fields. The form and colours are produced by our eyes.

The form, appearance, and feeling of ‘reality’ for us, then, is related to our perceptive abilities. Perhaps our deep consciousness (subconscious) interprets and shows us what we expect to see. I wonder if the world that babies see is less tangible than ours, and only becomes more ‘solid’ as they learn to accept our assumptions. As we grow up, ‘reality’ becomes more or less consistent for us.

So do we perceive the ‘truth’ of reality? I don’t believe so. Perhaps a version. We don’t perceive things as they are, but according to who we are.🤓🤔

By @DrDRHamilton: "There's even growing evidence in science that some of your kind sentiments even 'land' on the person. Research shows that sentiments like love, affection, and compassion can actually impact the nervous systems of the people we send them to."

Don’t miss @DrDRHamilton talking LIVE on Facebook at 1 pm today about the benefits of kindness meditation. MIndfulness vs Kindfulness