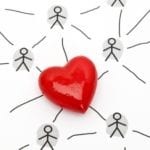 I love the concept of Pay it Forward. I first heard about it from the film of that name, starring a young Haley Joel Osment. Based on the novel by Catherine Ryan Hyde, the story follows a young boy whose idea to pay acts of kindness forward set in motion an extraordinary chain of events that led to hundreds of people being on the receiving end of kind acts.

The basic premise of Pay It Forward is that we repay kindness forwards to other people rather than in return to the person who helped us. So instead of ‘pay it back’ we ‘pay it forward’. It sets in motion a ripple- or domino-effect. The forces that keep it going are elevation and gratitude.

Elevation has been defined by psychologist Jonathan Haidt (pronounced Height) as a state of feeling inspired, moved, or uplifted through receiving kindness or witnessing an act of kindness or moral beauty. It’s the warm feeling we get in the heart. Many studies show that once a person feels elevated they tend to be more helpful to others, especially if they’ve just received kindness themselves.

My friend, Lesley, recently asked me to sign a few copies of my new book, ‘The 5 Side Effects of Kindness’ with the line, “To whoever Lesley gives this book to.” She likes to gift books to people. The idea has now caught on.

I happened to mention it in a few recent talks and it inspired some people to ask for their book to be inscribed in the same way. Now, dozens of people have received a signed book with that message. The elevation people feel after hearing what Lesley did has created a domino effect.

At my book launch recently, after I’d talked about the Pay It Forward concept, a lady who purchased a book and asked me to sign it then paid for a book for the next person in the book-signing queue. You may have heard of this kind of thing in coffee shops where someone pays for the next person’s coffee, or at motorway tolls where a person pays for the toll of the person behind them, each setting in motion a little ripple of kindness.

And the ripple of kindness is exactly what happened at my book launch. The person who learned that their book had just been paid for, in turn, chose to pay for the book of the person behind her. As that person approached and learned they had received some kindness, she also paid it forward and bought a book for the next person in line. This went on for a total of 9 people before ending at an elderly gentleman who was really quite overcome with emotion at learning of the pay-it-forward chain that presented him with a free book. He was visibly moved.

The National Kidney Registry in the USA generates a lot a Pay It Forward goodwill. Following the struggle to find a kidney donor who was a match for their daughter, the registry was set up by Jan and Garet Hil to help spare other families the same stress, ultimately speeding up the time it takes for donor matches to be found. It has started numerous kidney donor-chains.

One of the world’s longest Pay It Forward-style Kidney Donor Chains involved 34 consecutive kidney transplants involving 26 different hospitals. It began in December 2014 with Kathy Hart, an attorney from Minneapolis who heard her yoga instructor’s son needed a kidney, but not being a match she decided to sign up to the registry and donate one of her kidneys to someone else. It ended on 26th March 2015 with 77-year-old Mitzi Neyens of Wausau, Wisconsin. That’s 34 people’s lives saved by 34 consecutive incredible acts of kindness, done in a Pay It Forward fashion, all from a single act of kindness.

I really love that kindness sets domino effects in motion. It’s a heart-warming thought that so many people have so much goodwill in their hearts that they want to do kind things for others.

I picked up a hire car a half hour or so ago because I’m driving to give a talk this evening. It’s heavy snow where I am right now in central Scotland. After asking where I was driving to, Craig, one of the managers at Arnold Clark Rentals in Stirling, went online and looked at live traffic cameras all over the region and worked out a route for me that would avoid the heaviest of the snow. He didn’t need to do that. He was simply being kind, and I am extremely grateful for it.

So take every opportunity to be kind that life presents to you. And it will. Kindness really does matter.

And who knows, maybe your kindnesses will topple a few dominos.

6 thoughts on “Pay It Forward”

Here’s the recording on my flagship seminar for the @bankofengland the other day. Andy Haldane interviewed me, and took questions from the audience, on the subject of the mental and physical health benefits of kindness.😊

NEW PODCAST ALL ABOUT CHATTER.

But what exactly is chatter? My guest this week Dr @ethan_kross explains all in this clip.

Great conversation between @DrDRHamilton and @simonmundie on this #DTMS episode about kindness.
Would highly recommend listening and then we can all help get the R Number above 5...😉

I love this podcast with @dunblane_sc head tennis coach, Mark Walker - @tennis_walker - and Kris Soutar, two of the UK’s top tennis coaches. Fascinating insights into performance and was like listening to two pals in a bar. 🎾
https://podcasts.apple.com/gb/podcast/kris-soutars-tennis-journal/id1305908744?i=1000508172311