A Formula For How Destiny and Free Will Work Together 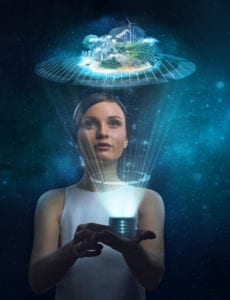 If you’re like most people, you’ve probably wondered whether things are meant to be – are you destined to be with that special person, or to have that job, or that friend, that dog, or that really difficult time in your life? Or do we create it all as we go along?

If you’re like me, I wrestled with it for years. There were things that I felt strongly were meant to be in my life: like going to the University I attended and also doing my PhD in the research group I ended up in, to even not getting the job I wanted in the pharmaceutical industry but instead getting one that exposed me to evidence of the placebo effect. This facilitated my route into writing books about the power of the mind, which I believe is my ‘destiny’.

But at the same time I am 100% certain that I shape my own life too, sometimes through taking action to make things happen and other times when seemingly coincidental things happen shortly after I’ve been thinking about them.

I wrote my book, ‘Is Your Life Mapped Out?: Unravelling the mystery of destiny vs free will’ to attempt to set my own mind at rest. This is what I came up with:

Before you go, “whhooooaaaaa, hey what’s with the math?” it’s actually much simpler than you think. Let me explain what the letters mean.

‘R’ is the letter I use for ‘The Reality that you experience’ and it’s caused by the letters that come after it. Here’s what they mean:

‘I’ is your intention. It’s the force of you Intending for something to happen, which often results in you acting on your intentions, or subconsciously setting in motion a chain of events that move you towards your goal.

‘E’ stands for your emotions. Emotion is a powerful force. If you have an intention to achieve something but your overall emotion about it is negative then emotion usually over rules intention and you don’t go anywhere. Alternatively, when you have a goal and you feel strongly positive when you think about it, you tend to move towards it (or attract it to you).

‘B’ stands for your beliefs. Beliefs can propel you to where you want to go or they can sabotage your efforts. Say you had a desire to be financially abundant but had a belief that it’s wrong to have money because people are starving, or that people with money are selfish or unkind, or that money is the ‘root of all evil’, for instance, then chances are these beliefs will over rule your intention to have money. No matter how hard you try, something will always seem to block your efforts.

You can usually tell what kind of beliefs you have about something by looking at your life. Stuff and experiences in your life that you are happy with, that tend to come easily to you, usually represent positive beliefs. Stuff and experiences you feel frustrated you’re not having usually signal negative beliefs in those areas. It’s best if your beliefs are in line with what you want to achieve.

‘p’ stands for ‘momentum of your current experience’. Just like a large ship in the ocean can’t make a sudden 90 degree turn, but turns throughout a large arc due to it’s weight, or momentum, so most people, when they decide to make a life change, still experience elements (circumstances, types of people, etc) of their old life for a while as their life turns in an arc rather than in a sudden straight line off to the right or left. Intention works a lot with momentum because the stronger your intention, the faster you break your momentum and the shorter the turning arc in your life.

‘Fe’ stands for external forces. These are forces in your environment that have an impact on your life and the kind of choices you make. They can be the weather, ‘chronobiological’, in terms of how the Earth’s rotation, the sun, and the moon can impact biology, they can be effects of food, or anything else that represents how we interact with our natural environment. They can even represent the physical or social environment a person lives in, which can be a very strong force for some.

‘Fi’ stands for internal forces. These are what I refer to as spiritual forces. I believe that consciousness transcends time and space and thus ‘You’ existed in some form or other before you were born on Earth. Rather than your life being a random event, then, it is likely that you were born at a particular time (given the entire span of Earth’s history) in a particular place, into a particular set of social and economic conditions, even into a particular family environment, and often with a latent skill set or direction you intended to move towards. These ‘preconditions’ would set the tone of the early years of your life, which would then have a strong bearing on the kind of adult you become and the direction of your life. When I talk of ‘destiny’, this is what I refer to.

‘O’ stands for the effect of other people on you. We’re all influenced by other people – either directly, by family, friends, colleagues, or even people we meet throughout our day, or indirectly, as world events affect the financial or social environment that we live and move in, or as our choices are influenced by marketing efforts, propaganda, or just information we pick up through watching or reading the media.

‘X’ is for any other forces that I haven’t though of. 🙂 I’m sure I’ve not thought of everything.

So the reality that you experience is related to your intentions, your emotions, your beliefs, the momentum of what’s currently happening in your life, external forces, internal (spiritual) forces, and the influence of other people.

So how do these forces interact with one another? Well, I think we are born into a set of conditions and circumstances that set the landscape of our lives and its colour tones. As we travel through our landscape, we are occasionally pulled left and right and even nudged back or sucked forwards from time to time. But amid these ‘winds’, we are always choosing, always creating, always shaping our lives. It is impossible not to. Thoughts are creative. What we focus on we move towards. That, too me, is a Law. Some call it the ‘Law of Attraction’ or the ‘Secret’.

Some people believe in destiny, others don’t. What I’ve written here is just my belief, coloured, perhaps, by the influences I’ve experienced in my life and also by what I’ve always sensed. In some ways I’ve sought scientific evidence to explain what I’ve always believed.

Whether you take comfort in an overall direction you feel you’re supposed to be going in or whether you’re more motivated in taking the actions that are necessary to get to where you want to get to is up to you. We’re all different. Some are more comfortable with the former, some with the latter.

Personally, I think destiny and free will interact constantly, just as nature and nurture interact. Genes do not act out with their environment, but in relationship with it.

So, too, do our hopes and dreams play out in relationship to our environment – both physical and spiritual.

Posted in Consciousness, Destiny vs Free Will