Why Children Need Love to Grow 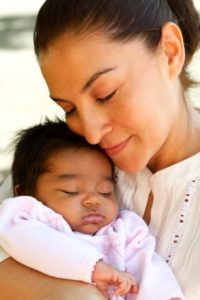 It’s pretty obvious that babies need love, but did you know that their actual physical and biological growth requires love?

Research shows that the early growth of at least one part of the brain (the orbitofrontal cortex – behind the orbits of the eyes) is almost wholly dependent upon the environment an infant is born into? The first 24 months is crucial in that it is during this time the building and shaping of this part of the brain sets the child up for life.

If an infant is born into an environment lacking in love, emotional warmth, and responsiveness, the growth of its brain is hugely affected.

But if an environment changes, the brain changes too. Research for the Bucharest Early Intervention Project (BEIP) has tracked the growth and development of children adopted internationally or fostered from Romanian Orphanages and indeed shown that if a child in such an institution is adopted or fostered within its first 2 years of life, growth and development return to normal. In fact, one of the most encouraging pieces of research related to the project contains, in the title, ‘… Evidence for Massive Catch-up Following International Adoption’.

If the child is left too much longer, hope is not lost but it does take a more skilled set of adoptive or foster parents to help the child emotionally adjust to life.

The problem with the orphanages was that infants weren’t getting the emotional warmth or physical contact that they need. But the research teaches us an important lesson for society in general. All babies, infants, and children fundamentally need love!

A lack of love, emotional warmth and physical contact basically slows down the growth mechanisms in the brain and body. For instance, human growth hormone is produced in smaller amounts when there’s not enough love around.

It’s like the genetics of the children quickly adapt to their environment. If there is insufficient emotional richness and stimulus to grow into, the body sees no need to waste energy in growing into such an environment, and so the growth genes shut down.

And it’s not just growth genes that respond to the environment. The ‘love hormone’ or ‘hugging hormone’, oxytocin, plays a crucial role too. Oxytocin contributes to the growth of many of the body’s cells.

Research in 2010 found that when there’s insufficient oxytocin present, which an infant gets from emotional warmth and warm physical contact, the rate of growth of heart muscle cells is significantly reduced. Evidence seems to suggest that oxytocin makes a similar key contribution to the early growth of numerous cell types in the body.

Such is the stunting of growth, in fact, when a child is deprived of love that UNICEF even use a statistic from the BEIP, that “For every 3 months a child spends in an institution, it loses a full month of growth.”

Of course, having a smaller child than average in society does not mean that the child is not being loved. All children have a different genetic potential based on the genes they inherit from their parents. My mum’s brothers are all over 6-feet tall, and my Dad is around that size too. It’s not too surprising, then, that I’m also a shade over 6 feet tall. But if I had grown up in an institution where I did not receive enough love and attention, I might have been 5 or 6 inches shorter and have much lower body weight. We’re talking about the reaction of a child’s growth genes to its environment. Children deprived of love often don’t grow to their full genetic potential.

And it’s not just humans that experience these effects. Evolution has ensured that nurturing care and attention are crucial for the survival and thriving of most warm-blooded species. In a study in the late 90s, scientists observed that the growth genes in rat pups shut down when the pups were removed from their mother, and switched right back on again when the mother returned, like the pup’s genes were simply responding to their mothers’ presence.

So what do we do with all this understanding? Importantly, I think teenagers could be educated in parenting while at school, and taught about the importance of love and care for the growth of children. It can be taught as a science, giving them even a basic understanding of how the brain grows and how growth responds to the environment. That would help.

But there is still the big problem of children all around the world living in institutions or without available caregivers.

I find myself reflecting on the unimaginably huge amount of cash injected into propping up the banking system, and to stabilise failing economies, and I can’t help but feel we’re not giving the same importance in society to the upbringing and wellbeing of children, who are, quite frankly, our future.

What can we do as individuals? Start by telling people about this. Share this information with them. Most people are stunned when I share it. When knowledge gets to people who are in a position to make a lot of changes, things can get done. We can also lobby our politicians.

And at risk of sounding soft or idealistic, I think we each have to individually try to spread more love in the world. It sounds a bit corny, we’ve all heard it before, but why not? We’re living in a socially connected world. Ideas and behaviours ripple out like stones dropped in water. Each of us can make a difference.

All research quoted in this blog is taken from David R Hamilton PhD, ‘Why Kindness is Good for You’ (Hay House, 2010). Click here to view

Click here to view some information on the Bucharest Early Intervention Project. The link takes you to a downloadable PDF from UNICEF.