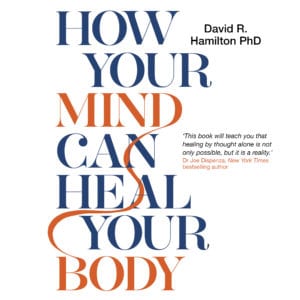 ⭐️ My book, ‘HOW YOUR MIND CAN HEAL YOUR BODY’ is officially on sale now from everywhere that sells books.

The book was first published 10 years ago and usually, when I write a book, I kind of just put it out there and don’t give it that much thought, so I never imagined I’d ever be writing a new edition, but my publisher (Hay House) asked me if I could update it. So I did.

I was only supposed to add wee bits and pieces but so much has happened in the world of the mind-body connection in 10 years, so I ended up adding 4 new chapters and sprinkling new stuff all throughout. Oops.

These cover things like how to use visualisation to enhance your immune system and I even share studies where this has been done in randomised controlled trials of women undergoing treatment for breast cancer. Typically, half do visualisation in addition to chemotherapy and radiotherapy, while the other half don’t. The visualisation group had a higher clinical response to treatment, which might be assumed to be the result of the extra impact of the immune system, as the researchers noted that the immune systems showed high levels of cytotoxicity even during treatment.

New chapters also deal with how visualisation works and how to actually do it and also include the application to sports, including how to enhance performance whether elite or beginner, or even learn a new skill, and even rehabilitation from stroke. I’ve also included several new stories from people who used visualisation as part of their recoveries from injury, illness or disease – including cancer, heart conditions, psoriasis, post-polio syndrome, and many more.

If you’re new to the book altogether, the first part discusses the placebo effect, sharing multiple examples in different settings, but also explaining how it works. Chapters also cover positive attitude, meditation, and how the brain doesn’t distinguish real from imaginary.

There’s also an A-Z list of visualisations for a large number of medical conditions.

If you’re interested in checking it out, you can find links on the ‘Books’ tab of my website, or just try anywhere that sells books, including Amazon, Barnes and Nobel, Waterstones.

5 thoughts on “How your mind can heal your body”

Nurture the Scientist in Your Child 👨‍🔬

Every child is a natural scientist👨‍🔬 They are curious, love to explore learn about science every day as they observe & explore their environment 🙏 Any fun games for shorty & I kind scientist friends @Fliss_Coumarin @DrDRHamilton

As we head into 2nd weekend of lockdown, thank you again for sticking with it. I know it gets harder every day - especially as weather improves - but PLEASE don’t be tempted to gather in parks, beach etc. Staying home gives us best chance of controlling the virus & saving lives🙏

THE FIVE SIDE EFFECTS OF KINDNESS:

1. Kindness makes you happier
2. It’s good for your heart
3. It slows down the ageing process
4. Kindness improves relationships
5. It’s contagious

Who's up for spreading a little kindness right now??

On last week's #FBLM, @DrDRHamilton showed us all how important kindness is.

WHO’S TRYING THE #KINDNESSCHALLENGE THIS WEEK?

Remember to tag me in your posts