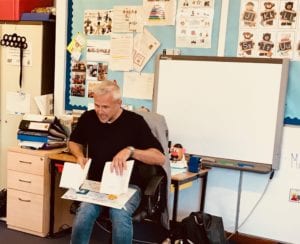 I spent a day earlier in the week at a primary school where I was talking to young children about the importance of kindness.

It was a school outside Glasgow, Scotland, on the invitation of my friend, John – aka Mr McLellan. The school has a dedicated ASD unit.

I was a little nervous as I’m not used to speaking to children. Almost all of my talks, lectures and workshops have been for adults. I usually talk a lot about the science of how kindness impacts health, as well as various aspects of the mind-body connection and self-esteem, so I wasn’t sure if I’d be able to simplify things for the children or even make what I do sound remotely interesting.

John assured me that I’d be fine, that they mostly just want to know what I do and then ask me questions. My first class was John’s class, a small class of 8.

I brought a couple of my books with me and began to talk about my job as a writer. I explained that I’m an ‘author’ and showed them some of my books and various international translations, including the same book in English, German, Romanian and even Japanese, which they found fascinating. I told them that I mostly write and teach about being kind and how important that is.

I asked if any of them knew what being kind meant. A sea of hands shot up, each of the children politely waiting to be asked. I went around them one-by one, amazed as they gave lovely examples of kindness; like helping someone up if they’ve fallen down, saying nice things to people, saying ‘thank you’, paying compliments, holding a door, even being respectful.

After a little more talk about kindness they had a chance to ask questions. Mr McLellan had given them all cards the day before so that they could write their questions and read from them.

One of the first questions was, “What age are you?” so we had a guessing game, followed by another guessing game around how many pages my book has and another about how many words are in it. Faces swelled with pride when they got answers right.

I was also asked things like, “What’s your favourite TV show?” and “Do you have a car? What kind is it?” It was so incredibly nice for the children just to get to ask what they want to know, and I enjoyed it immensely.

I repeated the same thing three more times through the day for children at all ages, including whole-year assemblies for primary 7 children (ages 11 and 12) as well as primary 1 (ages 4 and 5). In one class, I talked about how I went to university and then worked as a scientist making medicines. I asked if any of them knew what a scientist is. Many of could describe some aspects of different kinds of science. Between them, they painted a good picture of what a scientist does. Since my PhD was organic chemistry, which consists of sticking atoms together to make molecules, many of which end up as medicines, I asked if anyone knew what atoms were.

I wasn’t prepared for the following answer from a small boy:

“They’re tiny little particles that make up everything. They’re so tiny you can’t see them and everything is made up of millions of them.” Then he put his finger on the table and said, “I’m touching atoms right now.”

Few adults could give such a precise answer. I was actually speechless. That he mentioned the word ‘particles’ and had a sense of their size and relative quantities just blew me away. He must have been about 9 or 10 years old.

During lunch, I sat in on choir rehearsal, where Mr McLellan played some music that the children sang along to. It was a rehearsal for an audition later in the week for BBC Children in Need.

It took my breath away. These young children, singing together, some looking at each other for comfort or approval, moved me to tears. I can’t quite express in words how moving it was.

As I write this, I still see in my minds’ eye, happy, smiling faces from some of the children I spent most time with in John’s class. Their personalities are infectious. They left a really big impression on me.

The day was an unexpected pleasure for me. As I wrote above, I was a little nervous when I arrived because I’m not used to communicating what I write and teach about to young children, but my fears were unfounded. The children really just wanted to know about me and a little bit about what I did.

I was warmed by how much they knew about kindness, how they were learning at school what it is and how important it is. They were even being recognised for being kind with little awards. I don’t ever remember formally learning about kindness when I was at school, so this was great to see.

Overall, I was deeply inspired by the teachers and classroom assistants too. People often say to me that I’m doing a great job in spreading the word about kindness by writing about it and collecting scientific studies together into books and blogs that others can quote. People call me a kind person for this reason.

To be honest, I don’t see it like that. I really don’t. What inspired me deeply was John and his colleagues. How they were with the children. How they spoke with them, taught them, comforted them. I mentioned to John that he had such a kind and gentle way with the children that you would think he was their parent. These are people – like many other teachers, carers, service workers, etc, all around the world – who are on the front line actually doing the kindness. I write about it. They doit! It really moved me.

I am so grateful that there are so many people in the world on the front-line doing kindness daily, as well as the millions of people who are simply just kind people, acting on opportunities as they present themselves daily.

I think there is a lot more kindness in the world than most of us typically see. The experience has left me with more hope, gratitude, and a good feeling that things are changing for the better, even if it’s not always immediately obvious to see.