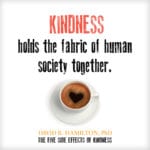 4 thoughts on “The Most Attractive Quality”

"Kindness doesn't always require a physical act. It can simply be friendliness. It can be listening. All these acts produce #kindnnection. Cardiac patients benifit more from support/kindnnection than meditation or yoga" 💜#5SideEffectsOfKindness 💟 https://t.co/OdTN79TPsp

'Nicola Sturgeon' giving a 'Toast to the Laddies' at an 'alternative' Burns night at the @RTSScotland with some of the other @witsherface gang... (this was a response to an earlier 'Toast to the Lassies' from 'Vladimir Putin' 😆

From practising positive self-talk to expressing gratitude, here are 20 short, concise, but powerful tips and strategies for self-love from @DrDRHamilton : https://t.co/325YU41h4V