If you ever feel like you don’t make a difference 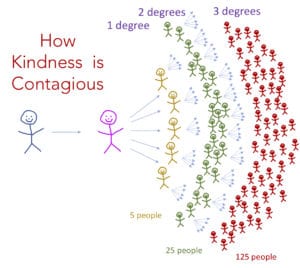 Kindness is highly contagious. It’s more contagious, in fact, than the cold.

The contagiousness of kindness is powered by what’s known as ‘elevation’, a description coined by social psychologist, Jonathan Haidt. It’s a sense of warmth, satisfaction, expansion, even gratitude. It’s the feeling we feel when we do something kind, but also when we receive kindness or even witness it.

Research by Nicholas Christakis and James Fowler, using a business game as a model, showed that kindness is contagious to at least 3 degrees of separation.

In real life, it’s much more interesting. When you are kind to someone, given the average degree of interaction we have in a typical day, that person is likely to be kind (or kinder) to around 5 people over the rest of the day, on account of how you made she or he feel. That’s 5 people at 1 degree of separation from you. Think about it. When someone last showed you kindness, didn’t you find yourself being a little kinder to others afterwards, whether in your attitude, words, or actions?

In case you ever wondered how much of an impact you have, let me suggest that you’re changing the world every day. Every day!

Your acts of kindness sends out ripples that impact people at 2 and 3 degrees away from you, people you won’t even meet in your life, yet whose days are a little lighter simply because of something you might have said or did for another person. You are far more important in this world than you think you are.