Why it’s best to write your goals down 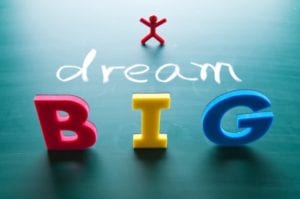 I personally find that writing things helps me focus better than having stuff in my head. The same can be said of writing your goals down. Some people have theirs in the head but research shows that we’re more likely to achieve them if we put pen to paper.

Research at the Dominican University of California in 2007 involved 149 people aged between 23 and 72 years old, from many different backgrounds and cultures.

The purpose of the research was to compare some different techniques and strategies used to achieve our goals.

Group 1 was asked to think about goals they’d like to accomplish over the next 4 weeks and reflect on the importance of the goal.

Group 2, instead, was asked to write down their goals and reflect on their importance, as group 1 had done.

Group 3 went a little further. Not only were they to write down their goals but they were also asked to write down some actions they could take.

Group 4 went further still, writing their goals down, reflecting on their importance, writing some action steps, but they also sent these action commitments to a supportive friend.

Group 5 did all that group 4 did, but they also made weekly progress reports to their supportive friend.

Well, as you might have guessed, Group 5 achieved the most and Group 1 the least. Group 5, in fact, achieved 78% more than group 1 did.

One of the most important factors emerging from the research was the value in writing our goals down. Writing down our goals better helps us focus on them. Otherwise, we tend to forget about them, especially as we get swept up in the busyness of life. Having your goals on paper means you tend to see them more often, whether it’s a glance at them on your desk, or seeing them stuck to the refrigerator each time you go for some food, or even finding them folded up in your purse or wallet.

Seeing our goals more often helps us focus on them more, so that when opportunities arise that can help us move a step closer, we are more likely to notice them and act on them.

I personally find that action is also important. Whenever I have a goal setting exercise at a workshop, I encourage people to not only write down some actions, but commit to taking at least one of the actions within the next 3 days.

It’s easy to feel pumped up at a seminar, especially if you’re inspired by the teacher or the possibilities you’re now seeing, and you’re also surrounded by like-minded people who are supportive of your hopes and aspirations, but once you go back to your life, your commitment to your goals often wanes and the goal gradually seems unrealistic or improbable. It is safer and easier to stay where you are.

I took a massive action in 1999 after attending a 4-day ‘Unleash the Power Within’ seminar led by Tony Robbins. I resigned from my job the next day back at work, with my vision to be a writer and public speaker. I’d been a scientist and project manager. If I didn’t take the action as quickly after the seminar, if another day or two had passed without me doing anything, I think my courage would likely have dissipated and I would have found several reasons why it really was just a silly idea to leave a very well paid job with great career prospects in pursuit of a pipe dream.

I can tell you now, with the greatest sincerity, that after writing 10 books, some of them bestsellers, and speaking in front of audiences around the world of hundreds and thousands, I am glad I took that action.