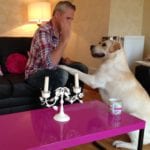 Oscar is a Labrador. He came into our lives when he was just an 8-week-old puppy, although Elizabeth and I had visited him regularly since he was 2 weeks old. We instantly fell in love with him and made the 400-mile round-trip drive to visit him almost every week until we were able to bring him home. He is now 19 months old.

I’ve had this conversation with the parents of some of Oscar’s friends. They’re very much the same. I think it has to do with the depth of bonds we form with animals. I know other people have the same kinds of bonds with cats, horses, and other animals.

Oscar has completely changed my life. We’ve formed a bond of the kind that I never knew existed, only because it’s not something I’ve had the experience of before.

He loves to play. I play with him every day – a lot – and I laugh out loud at his puppy antics. Someone told me that Labradors are still very much puppies until they are 3 years old. I wonder if that also means he will still steal clothes from the clothes horse, logs from the side of the fireplace, and tissues out of the bin, until he’s 3 as well.

He’s also very affectionate. He likes to come up to us and have his head, face, or neck rubbed, and then usually moves into a tummy-tickle position. When we stop, he looks up as if to say, ‘Hey, why are you stopping’. He also has a bit of a habit of sticking his wet nose in my eye socket. I think it’s just one of the ways he shows affection.

He gets nervous from time to time and I feel such empathy for him. Prior to Oscar I never really thought of animals having personalities. I knew they did, and I’d heard people talk about animals in that way, but it’s one of those things you don’t ever think about until you’re in the situation yourself. Oscar’s personality makes him all the more human to me.

I was quite a nervous child. I got nervous going new places, mostly in case I couldn’t get home again. I was also terrified of lifts. I had claustrophobia. I was 18 years old before I got over that fear.

Oscar gets nervous going into new places too. I feel I can relate to him. He also won’t go up a flight of stairs indoors. I think it’s the fear of not being able to get back down, even though he loves running up and down stairs outside. We first saw these kinds of fears when he was a young puppy. When we got him ready for his first walk, it took us about 15 minutes to coax him out of the house with lots of tasty treats because he was so afraid to cross the threshold of the front door and go down the single step to the front path.

He’s still like that now, not with our front door, but at other peoples’ houses. He hesitates and crouches low going over the threshold of houses he’s not been in yet. It took him three attempts on three different days to go into my mum and dad’s house for the first time.

My mum cuts my hair for me. She’s done it since I was a child. One day we brought Oscar to Mum and Dads’ and he wouldn’t enter the house. Elizabeth had to play with him in the back garden while my Mum cut my hair in the kitchen. It just shows part of his personally to us. As humans, we all have our ‘things’ – the fears, and loves, that make us who we are. I can empathise with Oscar, and that, I suppose, makes the connection stronger.

One of the things that causes me to smile every day is when he decides it’s play time. He looks to me as his playmate. I wanted to be the pack leader but I guess dogs choose for themselves who is assigned to which role. He does follow me around though, everywhere. Whenever I get up and move to another room, he gets up and follows me.

He frequently brings a ball or other toy to me. He stares right at me with the item in his mouth and does a little upwards nod as if to say, ‘OK Dad. Come get the ball’. If I don’t look at him, I hear a thud as he drops the toy. It’s like he knows the sound will get my attention. Sometimes, when I’m working on my laptop in the lounge, he jumps up on the sofa and profusely licks my face. Even when I have been busy writing, I can only laugh.

For the whole time Oscar has been with us, I’ve been writing a book about self-love (it’s almost finished now). I sometimes wonder if he was always supposed to come into my life at this time as I’ve grown so much as a person in that arena and a lot of that has been due to Oscar. I feel I’ve learned much more about myself, I’ve gained confidence, which is an important part of self-love, and I’ve stretched myself in new ways.

It’s all these things and many, many more that generate a bond of the kind that I hadn’t imaged before Oscar arrived in our lives. I suspect that, if you have a dog or other animal in your life, that you will be able to relate to this.

I just couldn’t refer to Oscar as ‘the dog’. It feels disrespectful, like he’s second rate or something. He’s family.