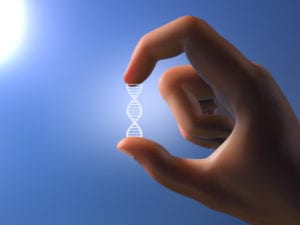 I was having a conversation recently with someone in business who told me he heard that humans are naturally selfish. He asked my opinion on the subject. I disagreed and explained why I believe we are, in fact, genetically wired to be kind.

Genetic wiring (our genome) is shaped over millions of years as humans adapt to the environment. To use a rather black and white (or pink and blue) example, say a tribe of our ancient ancestors a few million years ago had a pink gene and another tribe had a blue gene. Let’s say the pink gene is associated with kindness and say the blue gene is very much a ‘me first’ gene.

The tribe with the pink gene will help each other out in difficult times, allowing strong bonds to form. With less helping and more self-serving, the bonds in the blue tribe are much weaker.

Through millions of years of evolution, tribes with the strongest bonds thrive because when there’s danger, they work together, when there’s hunger, they share. Bonds are forged as we pool together. It’s the same today. Friendships last the test of time when they’re built around kindness, caring, compassion, laughter, and forgiveness.

When bonds are weak, relationships fracture when pressed or stressed. Without the strength of the group, individuals in the blue tribe are less likely to survive difficult times. The tribe, on the whole, is less likely to thrive.

As the blue tribe gradually dies out over time, the blue gene is more or less lost from the gene pool. The pink gene, on the other hand, finds its way into most of the human species because it’s a gene that helps us to thrive.

In this way, nature has ‘selected’ the pink gene as being the gene most suited to the environment. This is ‘Natural Selection’.

So it’s true to say that we are indeed born to be kind. Of course, we have a survival instinct, and we can be selfish when we need to be, but outside of immediate survival needs, our dominant nature is to be kind. It’s in our genes.

There’s strong modern day evidence that we have kindness genes. Scientists studying different variants (shades) of the oxytocin receptor gene (a good candidate for a pink gene) found that our natural tendency to be kind was related to which variant of the gene we have.

The same gene can come in several variants, or shades as I like to think of them. It fits nicely with my use of color to describe genes. You might enjoy my blog ‘Fifty Shades of Pink’, which discusses the subject. If kindness was not in our genes, there would be no connection between a gene variant (a shade of pink) and our tendency for kindness.

Another piece of evidence is that the vagus nerve is strongly correlated with compassion. People with highest vagal tone (a term a bit like muscle tone, used to imply a healthy vagus nerve) tend to be most compassionate, again a demonstration of the links between genetics and kindness.

Of course, as we all know, nothing is all in the genes. There’s always interplay between nature and nurture, that is, genetics and our experiences in life. The natural tendency to be kind can be developed and it can also be suppressed. People can learn to be selfish. Through nature and nurture, we have quite a variety of behaviors in our world, but left alone, we are born to be kind. Our nature is to care.

Evolution was misunderstood. The fittest is not the strongest or the fastest, it’s the kindest – he or she with the greatest capacity to form strong bonds.

Many have said that kindness and compassion are signs of weakness. I’d say they’re signs of strength … and intelligence, especially if we want to thrive in life.

For references to individual pieces of research, see

David R Hamilton PhD, ‘Why Kindness is Good for You‘

Dacher Keltner, ‘Born to be Good: The Science of a Meaningful Life‘.