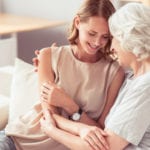 Have you ever cut an apple in half and left it on the table? If so, you’ll have noticed it quickly goes brown. This is oxidation, or oxidative stress, as scientists prefer to call it.

Oxidation occurs in skin too, and it can be a side-effect of lifestyle, diet, stress, even sunlight. It doesn’t happen as quickly in our skin as it does in a sliced apple left on a table, so don’t worry, but it happens nevertheless. It’s caused by what are known as free radicals.

Here’s a simple way to think of free radicals. Think of what Harry Potter’s spectacles look like: two ‘O’s and a little bridge between them. His spectacles are actually the exact shape of oxygen, the stuff we breathe. Oxygen – O2 – has two ‘O’ atoms and a bond (bridge) connecting them as in, O-O.

Now imagine Harry gets hit by one of Draco Malfoy’s spells and it snaps the bridge of his spectacles. So now he has two single lenses that are no longer bonded to one another. When this happens to oxygen, not due to one of Draco’s spells but to some kind of stress, the two ‘O’s are said to be free radicals.

Unfortunately, such is the strength of a free radical’s desire to bond that it will happily covet its neighbour’s wife, so to speak: it will pinch any nearby atom. This isn’t so great for the body, especially if the atom pinched is part of the cells of our skin, or even the cells that line our arteries, or our immune system, or even a brain cell. Once the free radical has taken an atom, these cells can begin to fall apart.

The body has natural ways of dealing with free radicals, though. It uses anti-oxidants. An anti-oxidant is anti (against) oxidation. It is a willing partner for a free radical, thereby eliminating any further damage to cells.

We get anti-oxidants from many fruits and vegetables, salads, teas, olive oil, cinnamon, dark chocolate, and many other foods. It’s one of the reasons why doctors encourage us to eat those foods. We also have natural anti-oxidants in the body.

But when free radicals are produced more abundantly than the body is able to mop them up, that’s when we get oxidation / oxidative stress.

In the skin, it contributes to the formation of wrinkles.

So, what has kindness got to do with it?

It’s probably easier to think of it the other way around. You’ve probably noticed that stress speeds up ageing. This is partly because stress increases free radicals.

On the other hand, kindness generates the hormone, ‘oxytocin’ (see ‘Molecules of Kindness’), which reduces free radicals.

Scientists publishing in the journal, Experimental Dermatology, were studying two types of skin cells: keratinocytes, which make up 90 per cent of the outer layer of skin, and fibroblasts, which are the cells that make collagen.

Now, you cannot get oxytocin from your diet. You cannot eat it or drink it. The only way to get oxytocin into your skin is to produce it naturally. And the way to do that is through your behaviour!

Oxytocin production is a side effect of kindness (see ‘The Five Side Effects of Kindness‘). Just as feeling stressed produces stress hormones, the feelings of warmth or connection that accompany acts of kindness generate oxytocin in the body.

This oxytocin reduces free radicals all throughout the body. Not only does it reduce free radicals in skin but studies show it reduces them in the arteries too, producing a ‘cardioprotective’ effect; that is, protecting the heart and arteries.

So, you want to reduce wrinkles? Be kind.

Someone once said to me, “That can’t be right because I am kind and I have wrinkles.”

Of course, being kind doesn’t mean you won’t age. But it does mean that being kind can slow the process down … just as stress speeds it up.

It simply comes down to the feelings that kindness and stress produce because these feelings generate substances in the body.

As I mentioned above, feeling stress generates stress hormones, and they contribute to the production of free radicals.

In other words, stress speeds up ageing, kindness slows it down.

So, yes, as unlikely as it might sound on first reading, kindness really can reduce wrinkles.

There has been a great deal of recent research into the internal physiological products of being kind and compassionate. I have collated much of this research, including the different ways that kindness impacts cells, the immune system, nervous system, arteries, and brain in my book, ‘The Five Side Effects of Kindness’. Available from all major booksellers. Here’s a few Amazon links. Amazon.co.uk  Amazon.com  Amazon.com.au  Amazon.ca  Audiobook

7 thoughts on “How kindness can reduce wrinkles”

Don’t miss @DrDRHamilton - scientist and bestselling author, talking LIVE on our Facebook page at 1 pm tomorrow about 'The Opposite of Stress' - how to counteract the impact of stress on the body.
#psychologiesmagazine #psychologies #wisdom #selfcare #kindness #mindfulliving

Hairdressing skills of @E_Caproni are improving... apparently the ‘disconnect’ is the look.😂

Trying to rock the novelty face mask. Face masks are mandatory in shops in Scotland, which I think is a great idea. On a trip out earlier, I was the only person wearing a novelty one, but at least it got a few smiles and some laughter.😆

Want to listen to his interview about the potential of lucid dream healing?
Register for the FREE summit today!… https://www.instagram.com/p/CCdyWcnn1x1/?igshid=1d4kvx0zmg0qw

I had a chat with my friend, Janet, this morning.

I feel deeply saddened about the death of George F