A lucky escape – premonition, guidance, or both? 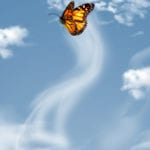 I often wonder about the timing of events.

Just the other day Elizabeth and I were walking our dog Oscar (now ten and a half months old, if you’ve been following his progress 🙂 ) towards the park in the morning. We were walking along a street when a pane of glass fell out of an upstairs window and smashed on the ground just 10 metres in front of us. It would almost certainly have caused us serious injury had we arrived a few seconds earlier.

The thing is, when we were leaving our house a few moments earlier, Elizabeth had to go back in to collect something she’d left on the table. This slowed us down by a few seconds.

Had Elizabeth not gone back into the house, we would probably have been right underneath the glass when it fell.

We were stunned at what happened and got to thinking how lucky we were.

I wondered afterwards, did Elizabeth have a premonition – a presentiment – and so cause us a delay that meant we missed the falling glass?

It’s a subject I’ve often thought about and I even wrote a chapter of my book, Is Your Life Mapped Out: Unravelling the mystery of destiny vs free will, on the research into presentiment. Basically, research seems to show that we ‘feel’ events before they occur. That’s what presentiment is – a pre-feeling. I believe that Elizabeth did receive a presentiment.

Another way you might look at it is that we were guided to slow down by guardian angels, spirit guides, our higher selves, or even deceased relatives.

It might seem strange for a person with a background in science to say he believes that angels or spirit guides exist, but why not? I am of the opinion that consciousness is not inside our heads, which is where I deviate from the mainstream scientific opinion of consciousness. I believe consciousness is fundamental to nature; it’s part of reality itself, and the brain (& heart) act more like aerials that receive it, much as your TV receives movies.

If consciousness is not inside your head then where is it? Everywhere!

And if their consciousness is of a higher energy (or frequency) than human consciousness, just as violet is higher energy than red, then this might give them the ability to watch in on human life and guide us from time to time. That is what I believe.

Were we guided to avoid the falling pane of glass? I believe we were. Did Elizabeth also receive a presentiment of it? I believe she did.

Interestingly, Oscar received a sharp cut to his mouth earlier in the morning. We were playing and I kicked a hard rubber ring (one of his toys) and it knocked his food bowl and water bowl into each other, causing his food bowl to break. He lunged into the broken pieces of porcelain to get the ring and cut the inside of his mouth.

Strange things happen in our world and I believe events are connected. That Oscar received a cut to his mouth, was he taking on the energy of a glass cut that somehow spared us from being cut by the falling glass? Some people say that dogs can absorb energy, deflecting it away, in a sense, from their owners. Or was Oscar being cut somehow a manifestation of a presentiment of the potential for us to be hit by the glass?

Some might say there is no connection and that these were just random events, that we connect events together to give meaning to our lives. I don’t think we should always be quite so quick to dismiss things as random. We are far more connected than we think. In Sanskrit, the words ‘Aham Brahasmi’ mean ‘the core of my being is the ultimate reality, the root and ground of the universe, the source of all that exists’.

If consciousness is the core of reality, then it seems to me that we, and the events of our lives, are far more connected than science would have us believe. Our lives are intertwined, where people and events are connected in space and time.

Forces exist that pull people together for a ‘reason, a season, or a lifetime’ and lead us to events that are meaningful for us.

So all things considered, I do think were we meant to avoid the falling glass and I’m very grateful for that.

Posted in Consciousness, Destiny vs Free Will, Intuition