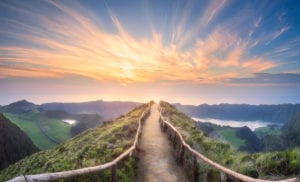 I’ve been thinking a bit recently about finding the balance between accepting things as they are and going with the flow and asserting your will or pushing for what you want. There’s a balance. There’s a time and a place for both, but the more I accept and go with the flow, the more things seem to work out better.

I was on a long-haul flight recently, flying BA from London to Sydney. During the second leg of the flight, after refuelling in Singapore, my TV screen wasn’t working. That meant I couldn’t watch the movie I was so looking forward to watching that would help pass the time over the next 7 and a half hours.

The air stewardess tried resetting the screen a few times, but it just didn’t work. I thought, ‘Oh well, a great opportunity to get on with some study and meditation’. She actually really appreciated the fact that I didn’t get upset or annoyed in the slightest. I just smiled and thanked her for trying. In gratitude for my seemingly relaxed and accepting attitude, she handed me a couple of mini-bottles of red wine. So, I got on with some studying that I really needed to do. It turns out that it was exactly the right thing as I made a few insights that I hadn’t made before that were really important.

A few hours later came meal time. They didn’t have any vegetarian meals (we were supposed to pre-order, but I hadn’t realised). The air stewardess (a different one) apologised. Again, I decided not to resist things and just go with the flow. Fasting is actually really healthy, so I accepted the fact that I’d do a kind of mini-fast. She seemed relieved that I didn’t make a fuss. Oh, and she also gave me a couple of mini bottles of red wine by way of apology.

About half an hour later, she appeared with a dish that she’d ‘borrowed’ from business class. It was really good – a tasty mushroom pasta dish that wasn’t available in economy class (coach), where I was seated. Since I had been so nice about it, she did everything she could to find me some food. Later, when we were being offered a sandwich before landing, she apologised once again, this time at the lack of vegetarian sandwiches. The first stewardess (of the TV screen) was in the opposite aisle and overheard. She quickly walked to the font of the plane and back again with a really lovely veggie sandwich for me.

Sometimes, we fight to get ourselves heard, or to get what we imagine we deserve and, granted, there are times when that is the right thing to do. I personally find, though, that when I don’t resist and look instead for the opportunity or hidden meaning in what’s happening, if I just shrug, accept, and get on with things, I find that things tend to work out better.

Acceptance in both instances brought me something better than the original thing I could have fought for. I got a lovely meal and a sandwich, great insights from my studies, accumulated 4 mini-bottles of red wine, and I brought a relieved and grateful smile to some faces due to my attitude.

Part of acceptance, for me, comes from a belief that we are always being nudged, directed, drawn (call it what you will) towards things that are best for us. That’s my belief, but it’s useful to have beliefs about what acceptance means for us, even if it’s just a belief that every cloud has a silver lining.

Some people find it useful to seek a deeper meaning in what’s happening, others find it a spiritual challenge to be able to accept and not resist; rising to the challenge of acceptance helps them shrug off seemingly challenging situations or even losses.

Acceptance can be also be about letting go of things. Buddhists talk of the law of impermanence, that all things are transient and must change. Everything must change. Everything evolves and grows, even you. People have to accept the changes in you, lest you feel pressured to remain the same for them. And so, you must also allow others to grow and change as they need to. As the Buddhists say, ‘Things come. Let them. Things go. Let them’.

Change is actually the only constant in the entire universe.

Change is inevitable … except from a vending machine.