Change Yourself, Change the World 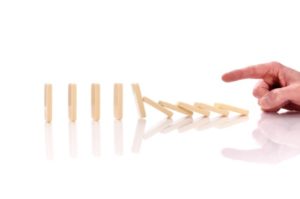 Gandhi’s immortalised words, ‘We must be the change we want to see in the world’, have as much of an impact today as they had when he first uttered them.

Most people have an intuitive sense that changing themselves in some way affects others. This is most obvious in a household. Say a person has been under stress for some time and they are having a negative effect on others in the household. A change in themselves, where they significantly reduce their stress, has an almost immediate positive effect on those around them, often lifting the general atmosphere of the household.

But changing ourselves has widespread effects too. Harvard research showed that such is the nature of the social networks that we live and move among, even an improvement in our emotional state affects others, and not just in the household. The research showed that each person’s emotional state impacted others at least up to three social steps away. In other words, if you became happier you would affect not only your friends, but your friends’ friends’ and your friends’ friend’s friends. Kindness travels in this fashion too, inspiring kindness in others much farther afield than your immediate contacts.

But there may be effects in more fundamental ways. Nature is filled with patterns and cycles that we don’t notice. Patterns of behaviour are everywhere, from the smallest scale in the changing state of subatomic particles, right up to the way that planets orbit galaxies. Cycles repeat themselves on ever-increasing scales. Since we are part of nature, we might start to understand why events in our lives, and even in global society as a whole, tend to repeat themselves. It may be that this is merely a consequence of cyclic tendencies of repeating patterns (fractals) nature.

But how does changing ourselves have anything to do with patterns? Well, for one, we know that all cycles must come to an end and new ones must begin, just as night must draw to a close at the birth of a new day. In life, the end of one cycle and the start of another gives us a ‘Choice Point’, where we have an opportunity to decide if we want to repeat the same kind of behavioural patterns of the past.

Cycles are not merely circles that repeat themselves over and over again. They move through time and space so their evolution is actually like a spiral, just like DNA. So as one cycle ends, the new one begins on a higher level than the previous one. We might suppose, then, that crises can show up as we near then end of some cycles, as we start the process of reorganising on a higher level. These crises are markers of a choice point – a window of opportunity where we can choose the circumstances and conditions of the next cycle.

Looking at the unprecedented number of crises facing humanity now, crises of conflict, overpopulation, climate change, crises in the world financial markets and currencies, we might confidently predict that we are currently facing a global choice point, and therefore an opportunity to make different choices than those we’ve made in the past. This choice point offers us an opportunity to find harmonious solutions to these problems (solutions that best serve the needs and desires of humanity) and put the challenges of the past well and truly behind us.

Patterns of behaviour in society are created, or at least fed and maintained, by all of us through the choices we make every day. Individually, as we change ourselves, we affect the patterns that we are ‘aligned’ with or, in other words, that we support through our actions. So say we simply choose to act in more compassionate and kind ways, or seek ways of aligning our purpose or direction in life with solutions that benefit humanity, then individually we start to change the world because we withdraw from old patterns and align ourselves with ones that better serve humanity, just as if you had paddled a canoe out of one current and into a different one.

But as you do so, others follow, just as emotions and behaviours are contagious through our social networks. People are inspired by our ways and change themselves to move into alignment with us, and others move into alignment with them, and so the new pattern of behavior increases exponentially. Eventually some sort of tipping point occurs and significant change occurs.

In this way, great social change has occurred in the past in different parts of the world. Similarly, even compassion and kindness can dominate where people strive to help others.

In 2001, Dr Scilla Elworthy, founder of the Oxford Research Group, three times Nobel Peace Prize nominee, and one of the visionaries in the new film and book, ‘Choice Point: Align Your Purpose’, found approximately 400 initiatives in war-torn areas of the world where local people chose to take peace into their own hands by building bridges between communities and releasing child soldiers. But such is the rapid expansion in these heartfelt movements, she said, “If you did the same thing today you would find at least five times as many.”

It’s easy to look at the news and conclude that the world is dominated by conflict, disaster and doom and gloom. But these merely signify a choice point. We don’t usually notice how many great and inspiring things are happening too as we go through the process of reorganising on a higher level. In fact, there are arguably far more positive changes going on around us than negative events, if we seek them out.

Positive change is happening right now. It’s all around us. All we need to do is align with it in our hearts and minds, and in our behaviors. We can do this by ensuring that what we do in life aligns with positive solutions that serve the needs and desires of humanity.

For many people this might be merely a tweak in focus towards more sustainable behaviors. For others it is in the carrying out of their interactions in more compassionate and kind ways, because these behaviours also support the emerging new pattern. For others it is about recognising that we are actually all members of one family and so carrying out our personal and business dealings from that perspective.

And as we do these things, we feed the new harmonious pattern, encouraging the tipping point towards the beginning of a new cycle.

Each one of us makes a difference! It’s your choice point. What do you choose?