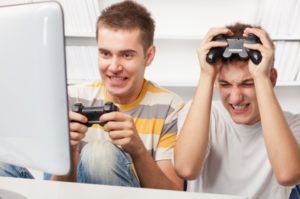 One of the things I most enjoyed over the holiday period when I was playing on the Nintendo Wii with family members. I did some super-high scoring on bowling. Whoopeee…. I also had some long slugging-it-out tennis matches with my nephew Jake, played a few rounds of golf, and danced on ‘Just Dance’ with my mum.

I think these kinds of games help us on so many ways. Judging by the aches and pains in my arms the morning after the first night’s gaming, I felt like I’d done some serious exercise. They also help with hand-eye coordination, and many games are good for brain development.

The other side of gaming, though, is playing violent video games where we maim our opponents. A number of studies on children, teenagers, and college students show that these kinds of games can affect behaviour, making the players more aggressive and less empathetic in the short and long-term.

In one study, 160 male and 160 female college students played either a violent or non-violent game for 20 minutes. When they were finished, the researchers staged a fake fight outside the room where two actors pretended to fight. One of them knocked the other to the ground and as the person struggled to get up, the victor strode off, leaving the person in pain and unable to stand up.

The point of the study was, would the gamers go outside the room and help the person to their feet, and would the type of game they played have any bearing on how long it would take them to offer help?

Studies of these kind suggest that playing violent video games can affect prosocial behaviour, that is our willingness to show helping behaviour to benefit someone or society, and dampens empathy. But not everyone is affected the same.

Before the era of modern real-life graphics I played hours of games in the 80s when I was a teenager, some of them violent, but I never became violent.

It is highly likely that a person’s social background and early upbringing will affect how much they are affected by violent video games. Children and teenagers living in a warm, generally positive emotional environment, are probably more immune to the effects than those who live in socially or emotionally deprived areas without the buffer of positive emotional support around them to counteract the aggressive effects.

The number of hours played on a regular basis also has an effect. Children who play a lot of hours of violent games tend to show the most aggression. Other studies, though, suggest that the effects are short-lived. But short-lived or not, some children are affected.

So what do we do? As my elder sister and mother of two of my nephews suggests, it’s up to the parents to monitor the kinds of games their children play and how much they play them.

Any maybe software developers could create more games that have a positive impact on prosocial behaviour, inspiring children with ideas of kindness and empathy, and the gaming companies can employ clever marketing people to popularise them, just as we’re seeing with games for the Wii. More please..!