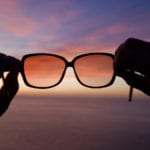 I’ve always thought of myself as having a positive attitude. Not all the time, of course. I think we all have our good and bad days, the latter making positive thinking quite a bit harder, those days when if someone says ‘Think positive’, well, I’ll leave it to your imagination.

But in many instances, whether a day is a good day or a bad day is really a matter of perspective. Let me share an example of a day I had a few weeks ago.

I’d flown to Dublin on a Sunday evening for my 4th speaking event in 4 days, arriving around 10.30pm, and when I went to retrieve my case from the luggage carousel, it hadn’t arrived. I reported it at the service desk and they discovered that my case was still in London. I explained that it was full of books and that I needed them for an event I was due to speak at the next day.

The girl at the desk sent an email to BA to explain that my case was a priority. She then informed me that there was a flight due in from London at 8am the next morning and that she’d try to get BA to put my case on that flight. If so, she’d then arrange for it to be couriered to the venue.

I was really grateful because she seemed really determined to help me. I also received a text from BA at 4.19am the next morning to tell me that my case was now on the plane. I decided then that I’d just collect the case myself off the 8am flight rather than have it couriered to the venue. After all, I was staying at an airport hotel just a few minutes away. Plus, I had an odd feeling that something might go wrong with couriering my case to the venue.

Arriving at the airport, I was led through the staff security area, which was quite cool. I’d forgotten that I had a bottle of water in my bag so they had to take it off me, but the guy said I could come back and collect it once I’d retrieved my case, which I thought was a nice gesture.

Case in hand I then had to make my way into Dublin. I didn’t know until then that this was the day of the Dublin marathon, the annual 26-mile 385 yards race. It turned out that many of the roads were closed and therefore cars, buses, and taxis couldn’t get into the part of the city I was travelling to.

The bus driver only discovered this himself when we reached the point of a road closure. He said I’d need to get off and walk the rest of the way, which was one and a half miles (2.4km). So I did, dragging my two cases with me (I had a carry-on case as well). Oh, and there was a light drizzle of rain, the kind of rain that soaks you right through, and I didn’t have a hood or an umbrella.

Despite my walk, I arrived early and the venue hadn’t opened yet so I sat in a lovely coffee shop nearby, which was also nice and warm, ideal, in fact, for drying my hair and clothes.

The day went well. I chatted with loads of nice people, delivered a 1-hour talk and taught a 2-hour workshop, having to make a swift exit afterwards to get back to the airport to make the last flight home. With the traffic situation due to the marathon, I just made it!

When I got back home later that evening, I received a lot of ‘Goodness, what a day!’, ‘What bad luck, what with the case, then getting soaked’, etc, ‘especially after all the travel you’ve done recently’. I understood. I’d have said the exact same things if it had been someone else. These kinds of reactions are motivated by empathy.

But you know what? Until that moment, it actually never occurred to me that the loss of my bag following by getting wet while dragging my cases over a mile and a half in the rain was a negative thing.

That really struck me! Until that moment, it really hadn’t dawned on me at all that I could have viewed it all as negative.

Instead, I remember that my main feeling at Dublin airport was gratitude that the girl at the service desk was so kind and helpful in tracing my bag. I also felt gratitude towards BA for texting me to let me know my case was onboard the early morning flight, even though they texted me in the middle of the night. In fact it was moments after I received that text that I had the intuitive insight to collect the case myself rather than let it be couriered. Had it been couriered it would never have reached the venue due to the road closure situation. So I was grateful for the text in two ways: one, because I knew my case was in transit, and two, because it inspired the intuition to collect it myself.

I also recalled how much I enjoyed not having to go through the customer security process but going through the staff one instead. I enjoyed chatting with the staff, and even remember high-fiving myself that I got my bottle of water back. After all, I’d only just bought it and hadn’t even opened it yet. A small thing, perhaps, but it was a first and I was in quite a good mood.

I also appreciated that the bus driver, upon learning of the road closure, helped me to find the venue on the Maps app on my iPhone and showed me that the road I had to walk was actually a straight road, leaving little chance of getting get lost. I also enjoyed the walk. It was a lovely part of the city and I recall looking at many of the lovely houses and imagining how people probably loved living here. I also loved that the coffee shop was warm and cosy where I could dry off.

I recalled, also, that I really enjoyed the day, chatting with people, catching up with one or two friends who were also there, and that my talk and workshop had gone really well (and the audiences laughed at my jokes), and my relief that the taxi driver got me to the airport on time afterwards.

Reflecting on all this made me think of how much our emotional responses to things depend upon our perspective.

For example, two people could arrive for a night at a hotel and stay in identical rooms. One person could label it a bad hotel and another might consider it a lovely hotel. It’s the same hotel. All that differs is their perspective, which might be a consequence of past experience. It’s a person’s perspective that runs the show.

Depending on our perspective, we can view the same event in multiple ways, making us feel good or bad. One of the insights in life, I believe, is being aware of this, and one of the skills in life is using it to our advantage.

I suddenly realised that the gratitude exercises I’d been doing recently had kind of worked wonders. From time to time I make a point of working on gratitude. I don’t do it all the time, lest I get bored with the exercise, but I do it, as I said, from time to time. I basically spend a few moments a day listing all the things, people, circumstances, events, aspects of nature, etc, that I’m grateful for at that time. I had been doing it for a couple of weeks prior to this eventful day.

The exercise seemed to have created a habit in my way of thinking regarding what I focused on and how I interpreted events. Instead of focusing on negative things – I could easily have been frustrated that my case didn’t arrive off the carousel, especially as it was so late at night and that it would likely take at least a half hour to go through the process of reporting it lost, and that I was wakened by a text message in the middle of the night, and that I had to walk for over half an hour in the rain while dragging a heavy case – but my mind seemed to settle on other things, aspects of the situations that made them seem lighter.

That’s the power in gratitude exercises, when we’re consistent with them, that they create habits of thinking that alter the way we experience things.

Now, I’m not saying that gratitude will always work this way. It hasn’t always been that way for me. And it’s not like gratitude teaches us to ignore difficult or painful things. It really just seems to be that, in everyday life, the effect of a gratitude practice is that the detail that our minds settle upon in the landscape of the day contains more light than dark. That’s all.

For me, what really struck me was the degree to which the practice I’d been doing had done this. It had spared me a lot of frustration, which I might have experienced instead.

14 thoughts on “A matter of perspective”

Made by a child in one of our School Kindness Workshops, for another child being bullied. Thank you so much @NBBRecycledFurn for supporting these workshops and making all this possible #kindness

It’s #MentalHealthAwarenessWeek The theme is nature. The human nervous system is actually ‘wired’ for nature as our species has spent 99.99% of our time in natural surrounds (only 0.01% in modern built up surroundings). Our nervous systems ‘recognise’ nature and relax.🌸🌳🐝

Another great little piece in @PsychologiesMag Proof that being kind is healthy💜. Words from a man with knowledge 👍
@DrDRHamilton

This is mental health awareness week. You may reme