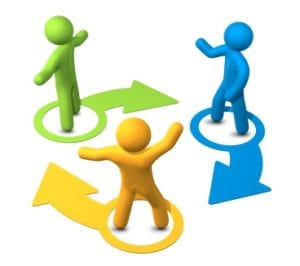 In my talks I quite often explain how we catch emotion from people. It’s facilitated by an interconnected network of brain cells known as the mirror neuron system. If you’re with someone who is happy, your brain actually mirrors the activity of their smile muscles (zygomaticus major and orbicularis oculi), signaling your muscles to do the same. And this feeds back into your brain, causing you to feel happier!

A few years ago, while watching my sister attempt to get food in my niece, Ellie’s’ mouth, who was just a baby at the time, the whole family were watching intently….. it had been quite an ordeal. I noticed that just as Ellie’s mouth finally opened, so too had everyone else’s’. The mirror neuron system at work!

So we can catch a person’s good mood by just hanging out with them. Of course, it’s also to do with what they say and the things they do, and also what they say to you. But the mirror neuron system plays a large role.

Actually, there’s a very simple trick involved. Outside of what a person says, you catch negative emotion through mirroring activity of their facial muscles that carry negative emotion, in particular the muscle between the eyebrows (corrugator supercilli). It’s purely an unconscious process. You’re not actually trying to do it. It’s a wired reflex reaction that some psychologists refer to as the, ‘chameleon effect’. At the same time, you also mirror their body language and even the way they’re breathing.

So how do you not catch negative emotion? I think you might have figured it out already! DON’T mirror their expressions! The moment you catch yourself doing it, just stop!

What I do is I scramble my facial muscles to interrupt any flow of signals to my brain’s emotional regions through the mirror neuron system. OK, it might look fairly odd if you start to make contortions to your face, but you can always pretend you’re rubbing your eyes and do it while your hands are over your face. Or you can be subtle and just massage your currugator supercilli (just to remind you, that’s the frown muscle between your eyebrows).

Keep your attention on your breathing for a few minutes while you are sporting your new body language. With your body and nervous system now conveying positive emotion and confidence, you’re sending new data into your brain’s emotional regions. It usually only takes a few seconds for a quick change in how you feel, but after a few minutes of doing it you will be feeling much better and more in control of yourself.

It works really very well and I have used it on numerous occasions.

OK, like anything, it’s not 100% effective as sometimes it matters what a person is saying to you, the intensity of the emotion on display, and also how you feel about yourself, but it does work a lot of the time so it’s definitely worth a try.

And now that you’re in a positive state you can start to infect people with your emotion. Instead of being on the receiving end of emotion you can project it out. That’s what I do!

Then you create ripples of positive emotion. It’s kinda cool!

If you want to read more, I explain the process as well as how to project positive emotion, plus many more aspects of the contagiousness of emotions, in my book, ‘The Contagious Power of Thinking’. To my pleasant surprise, it’s becoming quite a hit in corporations recently now that business people are finally coming to understand how the emotions of some individuals can disrupt or enhance team performance.