An intuitive search for my lost dog 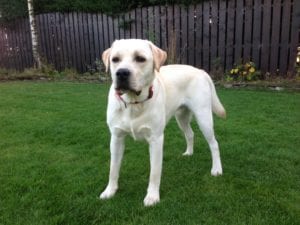 On Sunday last week, I was about to start teaching the final day of a 3-day ‘I Heart Me: The Science of Self-Love’ workshop. I was a little early so I had just popped into a coffee shop and sat down to enjoy a warm mug before walking to the venue.

The workshop was being held in Bridge of Allan, the village in central Scotland we moved to a few months ago.

Elizabeth had driven and dropped me off as she and Oscar (our 13-month old Labrador) were going for a walk up in the woods.

After about 20-minutes I received a frantic phone call from Elizabeth. All I heard at first was heavy breathing. My heart began to race. Then Elizabeth cried out, “I’ve lost Oscar.” He’d got the scent of a female dog in season and, well, just bolted. At first she thought he had just run a little bit ahead, as he often does. We usually just shout his name or blow on the whistle and he comes straight back. But this time he didn’t.

Elizabeth was distraught. By the time she phoned me he had been lost for almost ten minutes. I immediately got up from my table, left my bag, laptop and notes lying there, and sprinted out of the door with a passing shout to the waitress that I’d be back.

It’s funny what you can do when adrenalin is pumping. I used to be a sprinter and long-jumper in competitive athletics so I suppose I have a decent technical running style when I sprint. I took off, in full sprinter style (it attracted funny looks, given that I was wearing jeans, shoes, and a leather jacket), and ran at about 90% pace for around 600 metres, with the last part being up a steep hill. Yes, it’s amazing what you can do at these times.

When I was half way up the steep hill, the pace I’d been running at registered in my body and my legs felt like they’d suddenly turned to concrete. I could hardly move. Then I heard Elizabeth’s whistle – I wasn’t far away – and just gritted my teeth and started running again. It never ceases to amaze me how much the mind can over rule the body.

Once I reached the woods, we moved together for a hundred metres or so before we thought it best to spread out. Despite the stressful situation, I felt a strange sense of knowing that everything was OK. On one level, I knew I needed to be strong to help Elizabeth keep it together. But there was something else. I just knew he was safe and I also felt I knew where to find him.

Elizabeth moved off in the direction of the road, in case Oscar took that route. She worried that he might have gone that way and then get run over, as he does have this thing about chasing cars. My instinct was that Oscar was much higher up in the woods.

Of all the multiple interlocking paths leading upwards, I went on intuition alone, hardly thinking, like a dog with its nose to the ground following a scent, just following what seemed to be the right path.

After about 5 minutes I found him playing with a small female spaniel. He’d been there the whole time. Since he hadn’t gone away the owners had begun to back track down through the woods, following the route they had taken. They suspected that the dog (Oscar) had got lost so decided it best to go back the direction they’d come in the hope that they could find the owners.

I was so relieved. And thank goodness for mobile phones! I rang Elizabeth, who broke down in tears of relief, and we arranged where to meet.

By the time I got back to the workshop, I was only ten minutes late. Fortunately I’d met one of the participants as I had earlier bolted out of the coffee shop and briefly relayed what had happened, and asked if she could explain that I’d be there as soon as I could.

The group were so nice. When I arrived, one of them carried my bags through to the seminar room and someone else offered me coffee and some water.

I’ve often said that I’ve felt like a parent since we got Oscar (we don’t have children yet) so I suspect many people who read this can relate to what we were feeling. It’s a scary experience but I’m just glad my intuition was guiding me that day.

Funnily enough, one of the self-love meditations I taught through the weekend was imagining yourself as a being of light, connected to all things. The more we acknowledge that we are connected to everyone and everything, the more connected we feel, and the more those connections can guide us at the most important of times. Sunday, for me, was one of those times!