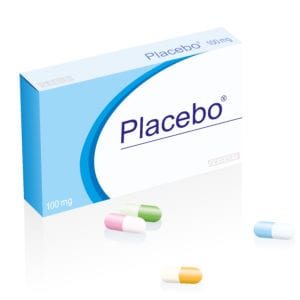 The answer to that question is Yes!

That’s according to new research led by Ted Kaptchuk, from the Program for Placebo Studies at Beth Israel Medical Center in Boston.

It involved 97 patients who had chronic back pain. First, they were given a 15-minute explanation of the placebo effect and how it worked. Then they were randomised into two groups.

One group were asked to continue with their ‘treatment as usual’ while the other group were given a bottle labelled “Placebo Pills” and were instructed to take 2-a-day as well as their usual treatment.

Conventional logic would tell you that the placebos shouldn’t work. “Surely a placebo only works if you don’t know you’re getting it. That’s the whole point. It’s blind faith,” said someone at one of my talks on the mind-body connection. Here they were being told they would be taking placebos so there’s no blind faith. Yet the placebos worked, and not just a little bit.

Those who knowingly took their placebos reported significant reductions in maximum pain, minimum pain, and even their usual pain – 3 different assessments of pain severity that doctors use. They even reported a substantial drop in pain-related disability.

This is not to say that pain is a figment of the imagination. That is not true at all. Try saying that to someone who suffers from chronic pain. What actually happens is that the mind can produce its own natural pain killers and it is these natural ones that are responsible for the drop in pain.

This result is similar to a study of 80 IBS sufferers conducted by the same researchers. They were also given placebos but the key, again, was what they were told. They were told that the pills were:

“… made of an inert substance, like sugar pills, that have been shown in clinical studies to produce significant improvement in IBS symptoms through mind-body self-healing processes.”

Result? The placebos worked. After taking their placebos, they rated their symptoms as moderately improved compared with people who didn’t receive any placebos, who reported only a slight change.

How? In both these studies, the key was knowing that there is such a thing as a mind-body connection, that the mind exerts real, physical, measureable, effects on the brain and throughout the body.

The mind-body connection is obvious when you think about it. What happens to males when they imagine a sexual fantasy? It can be quite obvious, if you know what I mean. The mind actually produces a substance called nitric oxide in certain blood vessels, which causes an increase in blood flow there. In fact, Viagra works by stimulating an enzyme to make nitric oxide.

To offer a different example, when you think of something that worries or stresses you, you increase adrenalin in your body. Again, your mind alters your biology.

Ultimately, it was through the mind-body connection that the above studies worked. Once the patients had an explanation of how the placebo effect works – that the mind does affect the body – it planted the knowledge in their minds that their thinking and what they believe would impact their biology. Then the act of taking the placebo triggered the expectation that it could or would help.

Add to that the habitual action of taking a pill and popping it in your mouth, which activates the subconscious, conditioned, expectation of a result, and there you have it. A placebo can work even if you know it’s a placebo!