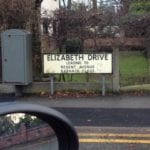 There was a fierce storm in the UK last Thursday. All throughout the night we could hear the wind and rain. It was almost deafening. In the morning, our garden was strewn with torn-off branches of trees.

I was due to drive from my home in central Scotland to London. Each year in December, my publisher (Hay House) organises a Christmas party in London for the European authors. My plan was to drive because I needed a car to get to and from a speaking event 2 days later.

I delayed my early morning departure by a few hours until the weather had much improved, then set off on what is usually a simple 7-hour drive.

When I was about half way, an accident had occurred just up ahead. It was on the M6 motorway, just west of Manchester, and the M6 was now being closed. Over the next few hours, a long queue of very-slow-moving traffic was moved off the motorway and headed towards the town of Warrington to pick up a main road back onto the M6 at the next junction.

With not much else to do in a stationary traffic queue, I checked the BBC Travel News website to get real-time updates on the roads. I learned that there were two closures of the M6. The other one was about 100 miles farther, near Birmingham. I would meet that one too. At these times, most people act in one of two ways.

The first is frustration. A man in a blue car behind me was so angry when we were funnelled off the M6 that he started banging on his steering wheel – with his head! The other option is to accept what is happening in the moment. It’s not always easy to do, but I reasoned that there wasn’t really anything I could do to change the situation. I would most likely miss the party. It’s either frustration or find a way of enjoying the journey. I chose option 2.

Even the thought of having that choice was quite relaxing. I felt empowered as I dwelled on idea that I am in control of my own mind, and therefore how I feel. Just then, I caught sight of a car pulling out of a housing state and had a sudden intuition that there was probably a quicker route through the estates that would bypass the traffic queues.

I decided that trusting my intuition might be a good way to enjoy the journey a bit, regardless of whether it actually got me to my destination any quicker or not. I checked the ‘Maps’ app on my iPhone and I could, indeed, see a route through the streets. I pulled off the main road and into the streets lined with houses.

As I drove along, I felt a little buzz of crazy excitement – to be 300km from home and instead of being on the M6, I was driving though quiet streets lined with houses. It felt good to be trusting my intuition on purpose and I determined to continue trusting it, regardless of where it might take me. I passed a street called, ‘ELIZABETH DRIVE. I smiled, as that’s the name of my partner…the Elizabeth bit. 🙂

I figured it would actually be quite nice to go back and take a photograph of the sign and then text it to Elizabeth, so I did. It’s little things like these that bring complete contrast to what we could or should be doing that can actually help us to feel good. It further removed my mind from the stress of the whole ‘getting-to-my-destination’ thing.

About two minutes later, I passed another street name and, of course, I had to stop and take another photograph. This one was for ‘DAVENHAM AVENUE’. I laughed out loud.

The little intuitive side-step into the housing estates probably saved me about an hour. By the time I picked up the road back onto the M6, I began to wonder if the time-saving I’d made would actually help me get to London on time for the party. Perhaps the M6 at Birmingham would be reopened by the time I got there, I wondered. Then I’d definitely make it. I felt a little burst of satisfaction at having listened to my intuition.

But back on the M6 and heading towards Birmingham, I began to wonder why we all seem so future-focused, including myself. Why was I now turning an enjoyable experience of intuition and contrast into being ‘the reason’ I’d get to the party? It felt like I was cheapening the experience, like I was taking something away from it, that it was merely a means to an end.

We all do this, don’t we? We try to explain why everything happens to us. But does there always need to be a reason? Does the present always need to be a means to get us to the future? Such thinking is a recipe for unhappiness and, to be honest, it’s a dish that most of us serve up to ourselves on a daily basis.

I had such fun diverting out of the traffic jam and into the streets of houses. Taking those photographs of the road signs might seem unimportant to many people, especially in a future-focused mindset, but it mattered to me. It was something I laughed at in the moment and it is what I most remember about my day in traffic. It’s these seemingly tiny moments that we most remember later in life. If we’re always looking to the future, our main memories are the goals we achieve. And these are short-lived, because we quickly come up with another goal. We miss so many of the moments in between. We forget about the journey.

I was soon caught up in traffic again. The M6 hadn’t reopened and I moved about 1km in 2 and a half hours. I was stationary much of the time. Great, I thought.

I did a meditation (the traffic was completely stationary, I had my engine switched off, and I did it with my eyes open). It was wonderful, and made more so with the excited edge to my emotions because I was meditating in a traffic jam. I bounced on my seat a few times afterwards. How many people could say they did a self-love meditation on the M6, I wondered?

I also listened to some great music on the radio, using the ‘Shazam’ app on my iPhone to get the name of the songs for downloading later when I could pick up a wifi connection.

I also made a few calls to friends and enjoyed a good laugh. One of my friends said, ‘Poor you, to be stuck on the road all day and miss the party’. My response was, truthfully, ‘I’ve had a great time!’ And I had.

I arrived at my hotel in London way too late for the party but I sat in the restaurant and had a lovely meal and a nice glass of red wine, and the service was excellent – smiling staff who did everything to ensure I enjoyed my stay.

Imagine if we applied this kind of thinking to our lives! My journey on the road could just as easily be the story of your life. Don’t you recognise it?

Don’t get me wrong, there is a time for future-thinking. It gives direction to our lives. But perhaps we don’t need to give it quite so much attention.

Do you want to live for the future and forget to live today, or do you want to squeeze every ounce of experience out of the moments of your life as the journey unfolds?

It’s up to you. You have that power of choice.

14 thoughts on “It’s about the journey, not the destination”