Can we see dead people? 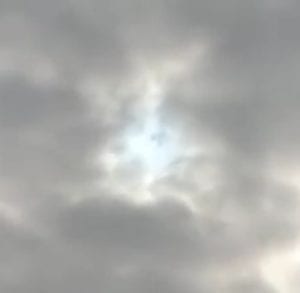 can you see the face of a dog?

How long would the human species last if we could all see and converse with deceased loved ones?

And let’s set aside for now whether it is even a valid question, whether such a thing is at all possible, or even whether life could possibly exist after ‘death’. Allow me to have a play with a few ideas for now and see where the question takes us.

It’s a question I asked myself when I was thinking about how some people have reportedly witnessed deceased loved ones appear.

When she was unwell a number of years ago, my Mum saw her mother and father appear beside her on two separate evenings. She was bedridden after having suffered a nervous breakdown. Her Mum, my Gran, had passed away two years earlier and showed up as solid as any human person. The following night, her Dad, my Papa, appeared more as a photographic negative. He had only been deceased for around a year. Papa told my mum not to worry, that everything was going to be ok. His words gave her hope and that hope carried her into wellness again.

My Mum never told anyone for years, lest they would think she had ‘lost her marbles’. It’s not the kind of thing anyone she knew had ever discussed. She only told me when I was an adult, when she knew that I had become interested in the subject. Over a cup of tea, I remember us wondering why Granny appeared solid yet Papa was more ethereal. We wondered if Granny was solid because she’d been gone longer, maybe she’d learned more and was consequently more skilled in making herself appear.

We will likely never have a scientific proof (or disproof) of the existence of life after death but I have gathered a few of my own thoughts over the years. One of them derives from asking a version of the question I posed at the start of this blog, ‘How long would the human species have lasted if our ancient ancestors could see and converse with deceased loved ones’? The short answer is ‘Not very long!’

The fear of death is one of the reasons why we live so long. It underlies the survival instinct that is much more than just an emotional fight to survive, but something that is wired so deep into the body that most people feel its effects almost every day as the stress response.

If early humans, say a few million years ago, routinely witnessed deceased loved ones appearing to them, it would take away much of their fear of death. Many would be more cavalier about their lives, knowing that death is not the end, that we’re still very much alive and even able to come back and hang with loved ones. Some might even crave death if they learned that life goes on and might even be easier on the ‘other side’, especially if their deceased loved ones seemed wiser or even smiled a lot.

Much of our fear of death comes from the fear that it is the end, that our existence is over. That’s it. Nada. Take away that fear and they’d be less cautious, more willing to put themselves in the way of danger, and therefore more likely to have a shorter life.

Thus, their genes would gradually be lost from the gene pool, including the genes that allowed them to perceive the deceased. For now, I’m going to call this perception, ‘Spirit Vision’, for the sake of not repeating ‘deceased loved ones’. Like all genes, genes that allowed our ancestors to have Spirit Vision would come in all shapes and sizes (known as polymorphs or variants). Some people would have clearer Spirit Vision than others, just as some people are naturally more altruistic than others (see my blog, ‘Fifty Shades of Pink’).

Those with the genes that gave them the clearest vision would be the ones less fearful of death and thus more likely, as a consequence, to have shorter lives than those with less clear vision. And so genes for clear Spirit Vision would gradually be lost from the gene pool, over evolutionary timescales of millions of years, yielding humans today who are more fearful of death and more likely to do whatever it takes to save their skin.

But, of course, the genes would not be entirely lost from the gene pool. Evolution doesn’t quite work that way. There will still be some of those ancient gene variants spread throughout the human race today. Thus, there would be people today whose genetics, and thus biology and brain chemistry that arises from their genetics, allows them to see deceased people at times.

This is not an endorsement of all psychics and mediums of course. I don’t know them all. Based on my reasoning, I suspect some really do see deceased people and perhaps others don’t. I don’t have any personal experience in this area, but I do have a couple of friends who do and I have no reason to doubt their testimony.

And when I say deceased people, I am understating their reality quite a bit, if they have a reality, that is. If their consciousness (being, essence, spirit) is no longer wedded to the physical form, what form would it exist in? Without reiterating what I’ve written in the occasional blog where I’ve touched upon this subject (see, ‘The Invisible Landscape‘ and ‘my visit from the other side’), it would be quite literally infinite. And thus the form we would ‘see’ would be based on what we’d expect to see, like the Spirit Vision version of the placebo effect, I suppose. And I presume they would also want to show us a form that we would most recognise.

Before I finish this blog, I want to offer that this is by no means a real scientific investigation into the reality of life after death, evolution, or genetics. I merely wanted to offer some of my personal thoughts on the subject.

Some might say that if a person did see a vision of a deceased loved one that it would merely be an illusion created by their brain chemistry. But following my reasoning, their genes could have created a brain chemistry that allows them to perceive what is really there?

I must confess that part of my motivation to write this piece is because I have given it a lot of thought since Oscar (my dog) passed away in November last year. I want to believe that he still exists in some form and that he is happy, that maybe even he’s looking out for me. If you look again at the image above, can you see the face of a dog with a stick in his mouth?

I was taking a video of the solar eclipse that happened over the UK on Friday 20th March and what seemed like the face of a dog (Oscar?) appeared for around 10 seconds of the 23 second clip. The photo above is a screenshot of the video.

I think in some ways it brings me comfort to believe that Oscar is still here and that I can speak with him in my prayers. If there are any leaps of faith or wild assumptions in my blog then that’s probably the reason. But, for the record, I do believe that we continue to exist after we pass away.